On Aug. 11, the Jewish mourning day of Tisha B’Av, some 350 people gathered in downtown Palo Alto to lament a history of Jewish genocide and destruction and to vow that it not be repeated in the immigrant community. It was a time of tears, reflection and fervent calls for compassionate treatment of immigrants and a stop to the government’s cruel separation of children from their families.

“We express our commitment to stand with immigrants in our community, on our southern border and around the world,” said Rabbi Amy Eilberg, a Bend the Arc: South Bay Chapter Board member, in opening the gathering. “They are experiencing precisely what our people have experienced.”

Rabbi Sheldon Lewis of Palo Alto told the crowd that the government’s inhumane treatment of immigrants is compromising our moral integrity as a nation and is contrary to our Jewish teachings to welcome the stranger.

“We stand here today fasting and mourning, because we will resist the loss of values on our southern border that threaten our moral strength as a nation,” said Lewis, a Bend the Arc: South Bay Chapter  Board member. “Compassion must be our guide. We declare emphatically, ‘No,’ to the cruelty to children and to families in our shared home.” 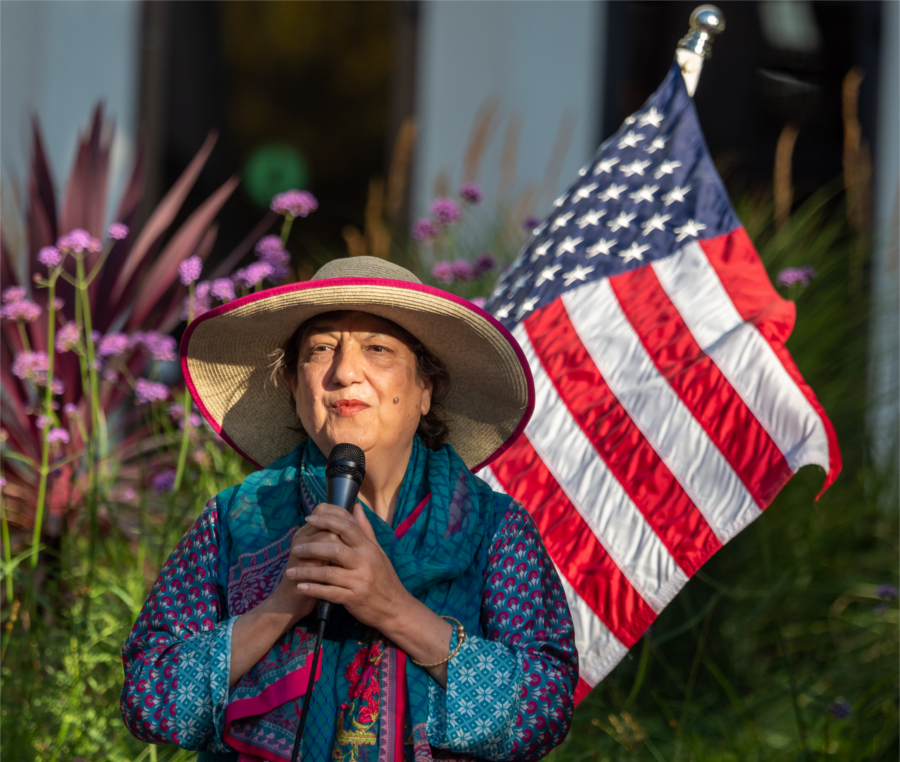 It was one of 60 Tisha B’Av events across the country, including some held at federal Immigration and Customs Enforcement (ICE) facilities, to mobilize in support of immigrants. It was a culmination of a three-week vigil, in which as many as 60 people gathered everyday at a major intersection in Palo Alto to call attention to the plight of immigrants at the border, particularly caged in inhumane conditions.

Participants in Palo Alto carried signs demanding that the government “Close the Camps,” and declaring that “Children Never Belong in Cages.” One participant waved an American flag to make it clear that we remain patriots, though deeply concerned about government policies.

Miguel Sanchez, a U.S. citizen who emigrated to the United States from Mexico 24 years ago, has been working with immigrants in the community who he says feel “fear, uncertainty, helplessness, stress, pain and sadness.”

He noted that immigrants contribute to society and pay some $24 billion a year in taxes, yet they have few rights. One submitted an application for a green card more than a decade ago and is still waiting. And the threat of mass deportations by ICE is causing overwhelming disruption to families, he said.

“Enforcement cannot be used as a justification for terrorizing our communities,” said Sanchez, who is a member of Congregation Kol Emeth in Palo Alto.

Organizers encouraged community members to take action in support of undocumented immigrants through these measures: