We are deeply disappointed that the San Mateo County District Attorney has decided not to charge the five County Sheriff’s deputies whose racial profiling and excessive force led to the death of Chinedu Okobi.

Okobi, a 36 year-old Black, Nigerian-American man who was walking in Millbrae, died on October 3, 2018, after deputies struck him with a baton and shot him with Taser electro-shock barbs seven times.

However, Okobi’s sister, Facebook executive Ebele Okobi, said in a Facebook post that videos of the incident did not show her brother jaywalking. Instead, they show him being “tortured to death” and yelling, “What did I do?”

He was pronounced dead of cardiac arrest at a nearby hospital shortly after the police encounter.

Bend the Arc South Bay has joined with Color of Change, Black Alliance for Just Immigration, Faith in Action, and local ACLU chapters in support of a campaign, Justice4Chinedu, that calls for justice in the case. With our partners, we call for a moratorium on San Mateo police officers’ and deputies’ use of Tasers. We also call for a re-examination of racial profiling and use of force in the County.

Mahony and Schulman are co-leaders of the Bend the Arc South Bay’s working group on criminal justice reform.

At the “Taser Study Session," a spokesman for the County Sheriff said Tasers are a method to control uncooperative suspects that are an intermediate level of force between the use of batons and the use of “deadly force”. Axon, the maker of Tasers, maintains that the weapons are safe. But a UCSF professor who has done extensive study of Tasers said at the hearing his own research suggests that while fatalities from Taser use are rare, they do occur. 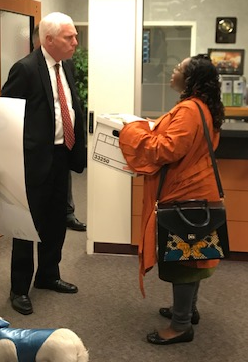 On February 13, Mahony and South Bay Bend the Arc member, Bob Grodsky, also participated in the delivery of petitions to the District Attorney’s office calling for action in the case. The 50,000 signed petitions had been gathered by Color of Change, the national group using the Internet to end injustices faced by Black people in the U.S. The petition delivery action was led by attorney Nana Gyamfi, Executive Director of the Black Alliance for Just Immigration, and Color of Change Criminal Justice Campaign Manager, Marena Blanchard. Gyamfi demanded that Wagstaffe release the video evidence, all the reports, and bring murder charges against the police officers whose Tasers appear to have killed Mr. Okobi.

Bend the Arc South Bay will support California A.B 392, which aims to rewrite the rules governing police use of force. We must stop these appalling killings and end police impunity.