On the morning of Wednesday, May 29 2019, Bend the Arc South Bay members Miriam Schulman and Rhona Mahony met with staff of their Assembly Member, Marc Berman of District 24. at his local office in Los Altos to urge him to vote “Aye” on AB 392, the California Act to Save Lives.

This bill restricts when law enforcement officers in the State of California may use deadly force. The Assembly released amendments to the bill last week, on Thursday, May 23. According to the Los Angeles Times, Governor Newsom pressured police lobbyists to find a compromise they could accept. The bill’s current language does not stress that officers must always de-escalate when safe to do so. It does require that officers use force only when necessary, and deadly force only when necessary to prevent immediate danger to people’s lives. Both of these requirements are valuable reforms of current law.

Berman’s staff member Ruth Ferguson and two summer interns were generous with their time. Ferguson said that Berman had already spoken with our organizing partner, PACT of San Jose, an affiliate of PICO.

Our Bend the Arc members emphasized that Seattle had adopted rules very close to the original, unamended language of our AB 392, in December of 2013. We now have five full years of data on the consequences of these rules for policing in Seattle. Moderate and serious use of force by police officers has fallen by 60%. There has been no increase in injuries to officers. There has been no increase in crime rates. Here in California, we want these same reforms, because we want to protect our families and neighbors, too. As Jews, we are called upon to protect our community. Black and brown folks in our communities are disproportionately affected by excessive police force, making this a key racial justice issue.

An hour-and-a-half after this meeting, we received the wonderful news that the Assembly had voted on and passed AB 392. Both of the Assembly Members we lobbied, Marc Berman (District 24) and Kansen Chu (District 25) voted “Aye.” While we are sad that the bill got watered down, we do think that the language that got passed represents significant progress. 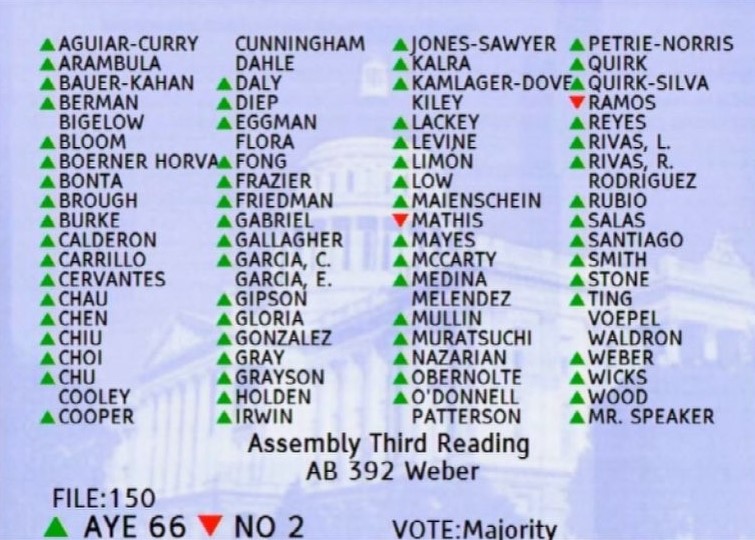 Final vote for AB 392 in the California State Assembly.