In meetings and phone calls, members of Bend the Arc, South Bay Chapter, have been pressing their case with Santa Clara County Supervisor Joe Simitian, urging him to refuse any collaboration between our county sheriff and ICE.

The lobbying effort comes in advance of a June 4 vote, in which supervisors will consider allowing the county to weaken its sanctuary policy by allowing some cooperation with U.S. immigration officials. The proposed change would permit the county to notify the U.S. Immigration and Customs Enforcement service when an undocumented immigrant with a record of a serious or violent offense is released from jail.

In a May 31 meeting, three Bend the Arc board members met with Simitian’s point person on immigration, Micaela Hellman-Tincher, to urge a vote against the change. 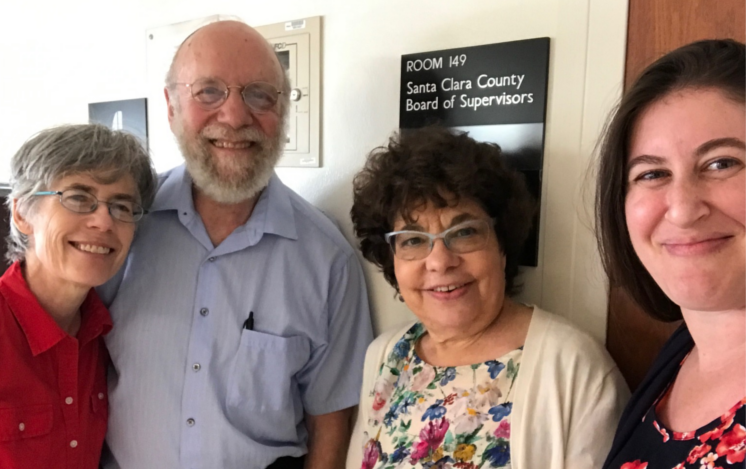 They argued that now is not the time to be working with ICE, which has shown little compassion in its treatment of families broken apart by deportations. They also shared credible news reports of ICE’s abusive treatment of detainees, sometimes through long periods of solitary confinement.
Hellman-Tincher said the Supervisor has a longstanding record of supporting immigrants’ rights and has signed on to a lawsuit against the Trump administration, which has proposed outlawing sanctuary cities.

Nonetheless, he has long believed that as a matter of public safety there should be limited county cooperation with ICE in cases of people with violent and serious felony convictions, she said.
The issue came to head earlier this year when Bambi Larson, 59, a south San Jose woman, was allegedly killed by a homeless, undocumented immigrant. Supervisor Dave Wasserman then introduced the revised sanctuary policy, which would effectively facilitate deportation of immigrants who are involved in these kinds of crimes. Over the past two months, supervisors have been consulting with stakeholders, including law enforcement officials and immigrants’ rights advocates, on the proposed policy change.

Hellman-Tincher said 99 percent of the calls she has received have been from constituents opposing any cooperation with ICE. Many of the callers were Bend the Arc members, she said.
In its report to the supervisors, the county counsel is recommending that ICE officials be required to obtain a judicial warrant before an undocumented detainee can be deported. That would be a positive step, at least guaranteeing detainees some form of due process.

The proposed policy change is expected to spark intense debate at the June 4 meeting, which is open to the public. Discussion of the issue is scheduled to begin no earlier than 2 p.m. in the Supervisors’ Chambers in San Jose.

Bend the Arc members have already made a difference! We encourage you to continue to make your concerns known to your county supervisor.