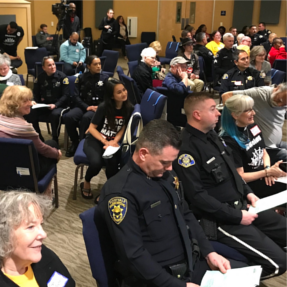 SB 1421, also known as the The Right to Know Act, gives the public the right to see certain records relating to police misconduct and incidents involving serious use of force.

A PACT organizer, Derrick Sanderlin, who is African-American, recounted a frightening episode in front of his apartment building when he felt he was being singled out by a San Jose police officer and put in danger solely because he is a black man. Silicon Valley De-Bug organizer, Rosa Chavez, said her family is still suffering from a sense of shock and loss following the shooting death of her unarmed nephew, Jacob Dominguez, by officers in the San Jose Police Department.  Chavez's family has submitted an SB 1421 request, but has not received any records from the SJPD.
Rhona Mahony, South Bay Chapter leader of our Criminal Justice Reform team, attended the Community Dialogue and participated in a small discussion group with police officers from San Jose and Sunnyvale.  Her group also included community members from Los Gatos; an African-American congregant of Shalom Iglesia church, which hosted the event; a young Latino man who is a member of PACT; a lawyer for mentally ill persons; and a member of the Jewish Community Relations Council.  In the group, people shared their hopes and concerns for more police transparency and accountability.  All agreed that the public must know when our police officers have been suspected of abusing their power and how their supervisors dealt with the possible abuse.

San Jose Assistant Chief Dave Knopf said that he was happy that SB 1421 has made it possible for the SJPD to publicize its investigations of misconduct by its police officers and the discipline meted out to each offending officer.  In the past, he said, California's unusual police secrecy law made that impossible.  The secrecy law hurt the trust of residents in the good faith of the department, he said.
The chiefs and the officers in Mahony's small discussion group said that their main concern was that police department staff now must devote many hours to the legally required redaction of victims' and bystanders' personal information, voices, and faces from records, audio, and video. So far, they haven't received the extra staff needed to redact the records quickly.
The absence of police chiefs and officers from Palo Alto and Los Gatos was conspicuous.  Residents of Los Gatos in Mahony's small discussion group were upset that their department sent no one to the event.  Mahony noted that the Palo Alto police department has a long history of complaints about its racial profiling of black and brown pedestrians and drivers.  She was disappointed that no one from the Palo Alto department showed up.
Many thanks to PACT organizers for putting together this moving event. It brought so many people together for honest and respectful sharing of perspectives and experiences. We will insist our police chiefs honor their public commitment to opening their records on police misconduct.  The Palo Alto and Los Gatos police departments will hear from us, as well.  We insist on complete transparency, and we will win full accountability.  No more police impunity!