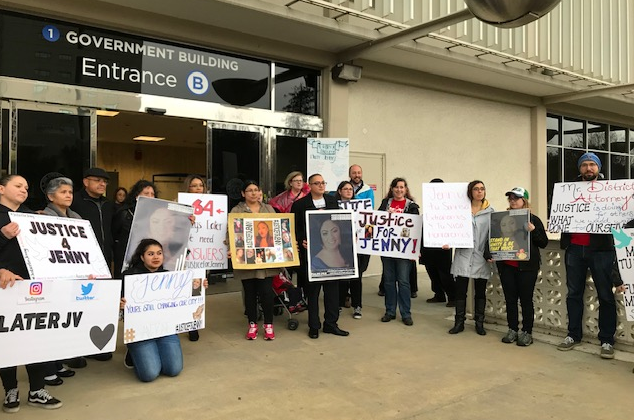 We call on the San Jose District Attorney to release all available video and charge the officers who shot Jenny Vasquez to death on Christmas morning, 2018.

The San Jose Police Department has kept the the family of Jennifer Vasquez in the dark about the full circumstances of her death.  Silicon Valley De-Bug and the NAACP organized a rally on February 26 to demand #JusticeforJenny in front of the Santa Clara County District Attorney’s Office.  Members of Showing Up for Racial Justice at Sacred Heart attended, along with Miriam Schulman and Rhona Mahony, co-leaders of the Criminal Justice Reform team of our South Bay Chapter of Bend the Arc.

Vasquez’s family and friends spoke movingly at the rally about their grief and frustration that more details were not forthcoming from the Santa Clara County District Attorney. The family met with the District Attorney's office in January but still have not received a report.

Vasquez was pursued by San Jose police, who mistakenly believed she was involved in a shooting. Police officers say that they learned while in pursuit that the car she was driving had been reported as stolen. The police pursued the car Vasquez was driving until she drove into fence. When she began driving back and forth to free the car, police claim she was trying to ram them. They fired, hitting her with mulitple bullets in the face and head.

More than 60 days have passed since the shooting. The public still doesn’t know many crucial details, because the Police Department is withholding footage from the body cameras that the officers were wearing. Body cams were supposed to provide greater transparency for the public in cases where excessive use of force is suspected.