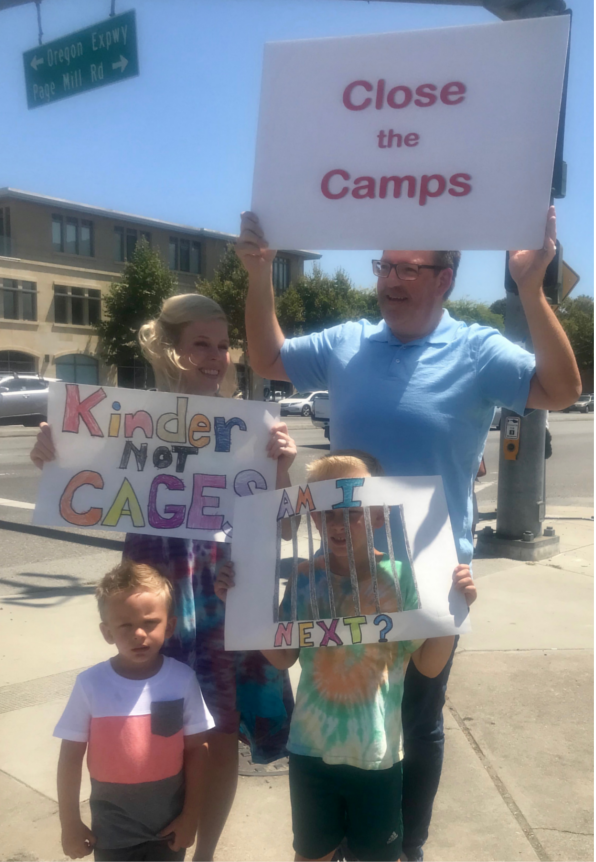 Community members are invited to participate in a multi-faith gathering in downtown Palo Alto Sunday, August 11, in a collective call for more compassionate treatment of immigrants, particularly children and their families.

The gathering will mark the Jewish holiday of Tisha B’Av, the most somber day of mourning in the Jewish calendar.  The Jewish community is joining the Quaker community in a public lament and worship at City Hall, 250 Hamilton Ave., from 6 p.m. to 7:15 p.m. Some 36 cities across the United States are sponsoring similar events, linking Tisha B’Av to concerns about the intolerable treatment of migrants seeking entry at the southern border.

The event is the culmination of a three-week vigil, in which crowds have been gathering daily at a busy intersection in Palo Alto to support justice for immigrants and protest the separation of children from their parents and the detention of children in cages in inhumane conditions. Some 30 to 60 people have been standing at the corner of El Camino Real and Page Mill Road every day since July 21, carrying signs that call for “No Kids in Cages” and “No Children in Detention,” among other demands.

And State Assemblyman Marc Berman, D-Palo Alto, also joined the group one day with two of his staff people, saying he was grateful that community members were standing up for justice for immigrants.

Nechama Tamler, a board member for Bend the Arc South Bay, said she was motivated to organize the vigil after reading in June that the Immigration and Customs Enforcement agency (ICE) had separated an additional 900 children from their parents in defiance of legal rulings.

“I hit a wall, and I said, ‘This is intolerable,’” Tamler said. “I have donated funds to many organizations helping people at the border, and I have contacted my Senators and Member of Congress. But I felt I needed to do something more – something physical.

“We are better than this. This is not who we are,” she said.

The vigil is sponsored by Bend the Arc: South Bay Chapter, together with allies and friends in the community, including the San Francisco-based Jewish Community Relations Council, Multi-Faith Voices for Peace, members of Bay Area synagogues and Spark Church.

Many hundreds of passing motorists have honked their horns or given a thumbs up to the call for immigrant justice. Some protesters also have been carrying American flags to reinforce that they are patriots just expressing concern with a government policy they find intolerable.

“I have never in my lifetime been as ashamed of what our government is doing in our name,” said Sheldon Lewis, Rabbi Emeritus at Congregation Kol Emeth in Palo Alto and a Bend the Arc:South Bay Chapter board member who helped organize the vigil. “I think there is such a gross violation of Jewish and American values, with the abuse of children and separation of families. So this vigil is an outlet for us to stand together and speak out. What’s hopeful is that so many people have stood up and been moved.”

There have been many inspiring moments during the vigil. One man, who described himself as a Middle Eastern immigrant, stopped by on a particularly warm day with bottles of ice-cold water for the protesters. The driver of a Mexican food truck has passed by every day, honking her horn to the tune of “La Cucharacha.” And an employee in the nearby Palo Alto Square brought his family, including his two young sons, one of whom carried a sign of a child in jail, with the heading, “Am I Next?”

Ken Adler, a member of Congregation Beth Am, came dressed one as Uncle Sam and carried a flag calling for Justicia Para Inmigrantes (Justice for Immigrants).

“I believe there ought to be - and there’s a constitutional right for - justice for immigrants,” Adler said. “One of the strong directives of Judaism is the pursuit of justice. I buy into that.”

Michael Hahn, a member of Congregation Kol Emeth, has come several times to the vigil, as he believes migrants, particularly those fleeing violence in their home countries, deserve better than the treatment they are receiving from ICE.

“People who are escaping torture should be treated with respect,” Hahn said. “You can believe in strong borders and rule of law, but you shouldn’t be separating children from their parents.”

The Raging Grannies, with their colorful hats, have also shown up several times to the vigil, singing songs that were captured on video by Telemundo, the nation’s largest Spanish-language television network.

And State Assemblyman Marc Berman, D-Palo Alto, also joined the group one day with two of his staff people, saying he was grateful that community members were standing up for justice for immigrants.