With immigration now a pitched battle in Congress, four Bend the Arc leaders from the South Bay met Feb. 4 with aides to Rep. Anna Eshoo (D-Palo Alto), to reinforce our support for the immigrant communities now under attack. 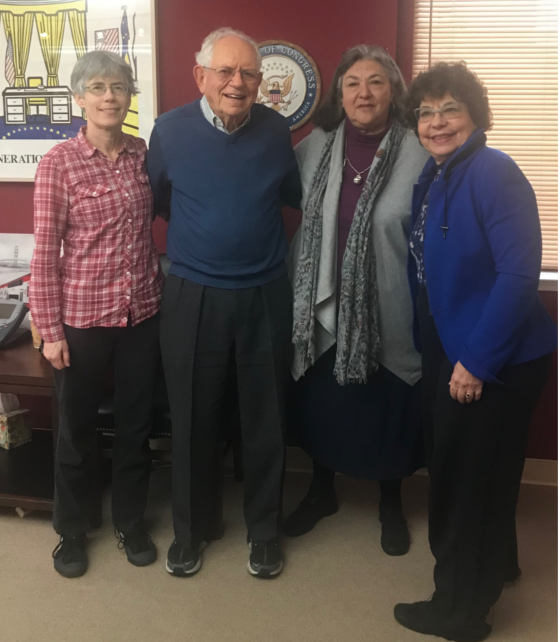 In a 45-minute meeting in Eshoo’s Palo Alto office, we pressed her staff on the importance of raising the limit on the number of refugees who can enter the country and of reuniting children separated from their families at the border. The current administration is restricting refugee admissions to 30,000 a year, a paltry number given the world’s population of 25 million refugees; proposed legislation would raise this number to at least 110,000 a year.

These issues have resonated with Eshoo, who is of immigrant stock herself (she is of Assyrian/Armenian background), said Patty Kim, district deputy chief of staff/counsel to Eshoo. Last summer, she said the longtime Congresswoman visited the border and met with some of the unaccompanied children detained there. It was a heart-breaking trip.

“She was just in tears. It was a very hard experience for her,” Kim told us.

She said Eshoo and her colleagues have been making daily requests to the Department of Homeland Security for updates on the status of the separated children, some of whom remain in U.S. custody.

“We are very committed to making sure these children are protected,” she said.

Eshoo also favors increasing the number of refugee admissions and welcomed a petition from Phil Spiegel, a Bend the Arc leader, who had collected nearly 100 signatures in support of the move.

The Congresswoman remains opposed to any funding for a border wall, which she considers it “a waste of money,” Kim said.

Rhona Mahony, another Bend the Arc leader, briefed Kim on some of our efforts in criminal justice reform, particularly our work in eliminating money bail in California. We helped gain approval of state legislation that would do away with the money bail system, but the move has been challenged by the bail-bond industry, which has been successful in having it placed on the 2020 ballot as a statewide initiative (which we strongly oppose).

Kim said Eshoo remains open to efforts to improve the criminal justice system, should there be initiatives proposed on the federal side. Some 10 percent of inmates in the country are housed in federal prisons.

The Congresswoman welcomes calls and letters, as it helps buttress her positions on legislation if she knows she has significant backing from her constituents. “She always says her constituents are her vitamin-B shots,” Kim said.

So it’s important that we thank her for her work and let her know we are behind her. Please call or text Eshoo's office to emphasize that her constituents are committed to immigration reform, family unification and justice for those seeking asylum.

In addition to Phil and Rhona, Bend the Arc leaders Nechama Tamler and Ruthann Richter Hammer participated in the meeting.