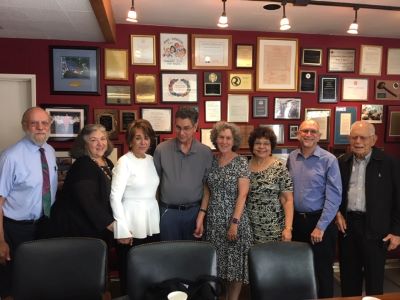 Disturbed by stories of migrant mistreatment at the border, seven Bend the Arc members met Aug. 27 with Rep. Anna Eshoo (D-Palo Alto) to press for limits on federal funding for immigrant detention.

The goal is to use budget restraints – either a funding cut or a blockage of any increase - to prevent federal Immigration and Customs Enforcement (ICE) from detaining large numbers of immigrants in inhumane conditions and to stop the separation of children from parents.

Eshoo needed little convincing, however, as a July trip to the country’s largest federal detention facility in McAllen,Texas left her with images that haunt her to this day, she said.

“There are two words that stand out for me: cruelty and incompetence,” Eshoo told the group.

Eshoo was part of a Democratic Congressional delegation that visited two detention sites in Texas in early July. In McAllen, she saw 42 young men crammed into a circular room designed for 10 people. The men were forced to stand for lack of space, were unable to shower and had only limited access to toilet facilities. The lights remained on 24 hours a day.

“That is a form of torture,” Eshoo said. “Even through the glass, we could smell the stench in the room.”

The guards had removed youngsters from their parents and held them in a separate room, where toddlers reached out to the Congressional visitors through the window, Eshoo said.

“One of the guards said, ‘The good thing is they can see each other (parents and children) through the glass,’” she recalled. It was hardly any comfort as the family members couldn’t touch or have any direct contact with their loved ones. One guard remarked that he hadn’t been trained to change diapers, Eshoo said.

She said officials with the U.S. Department of Homeland Security aren’t even schooled on the laws they are supposed to enforce. For instance, she noted that asylum is legal - something officials often don’t recognize.

“These are not people who are jumping over walls. They are presenting themselves as asylum seekers,” Eshoo said.

The Bend the Arc team gave Eshoo a report on a University of Syracuse study which showed that 99 percent of asylum seekers show up for their court dates. So detaining these individuals is unnecessary and a waste of taxpayer funds. Eshoo also said that her hotel in Texas cost less than the government is billing taxpayers to house migrants in detention with no beds, little food and other essentials.

Eshoo defended her June vote in favor of an emergency funding bill that allocated $4.6 billion for ICE, designed to provide humanitarian aid for the migrants.

The House version had included provisions for medical care, nutrition and hygiene and for greater Congressional oversight, among other things, but many of these restrictions were diluted in the Senate version. Eshoo said she voted for the legislation nonetheless because without it, “The funding for children was going down to zero. I couldn’t go to sleep with that.”

Eshoo praised Bend the Arc members for their “extraordinary advocacy” and for standing up for their values in “one of the darker chapters in American history.”

She encouraged us to continue to collaborate with other partners, saying there is strength in numbers. She also said the involvement of spiritual leaders, particularly in multi-faith settings, helps strengthen our message. And she encouraged us to keep our concerns in the news as much as possible.

Bend the Arc will continue to lobby against any increases in ICE funding, once formal legislation is introduced in the fall. We will also oppose the diversion of funds from the Federal Emergency Management Agency or other accounts, as has been done in the past, to support ICE’s activities. We  will also insist on measures to hold ICE and U.S. Customs and Border Protection accountable on any funding bill.