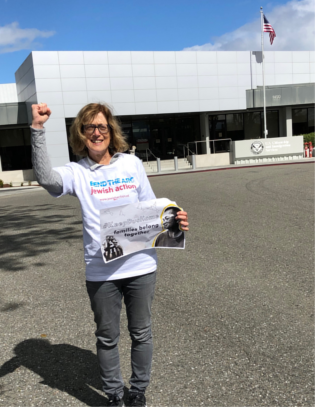 Bend the Arc members turned out March 8 in support of Duc Nguyen, a 35-year-old San Jose resident from Vietnam who has been repeatedly threatened with deportation by ICE (the U.S. Immigration and Customs Enforcement).

Nguyen came to California at age 12 under a humanitarian resettlement program, according to the nonprofit advocacy group, VietUnity South Bay. He allegedly fell in with a gang and became caught up in the juvenile justice system.

However, over the next two decades, he led a productive life and now has a job and family members who depend on him.

In recent months, he has been harassed by ICE, which has called him in twice for impromptu deportation hearings, both of which were cancelled at the last minute, said Diane Glazer, chair of Bend the Arc’s South Bay chapter.

On March 8, one of Nguyen’s scheduled interview dates, Glazer joined dozens of other activists who rallied on his behalf outside the ICE office in Santa Clara. Bend the Arc has partnered with several South Bay organizations, including VietUnity, PACT (People Acting in Community Together) and the Santa Clara County Rapid Response Network, in support of Nguyen. Rabbi Melanie Aron, a    Bend the Arc member, also attended the rally.