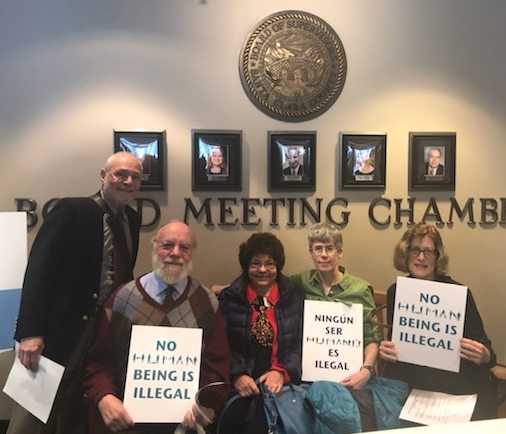 Santa Clara County officials are considering a change to weaken the county’s strong sanctuary policy by allowing the County Sheriffs Department to tell U.S. immigration officials when the county is about to release from jail an undocumented immigrant who has been convicted of a serious or violent felony.

The county’s Board of Supervisors voted April 9 on a 4-1 vote to allow 60 days to consult stakeholders about the policy change, which is supported by some law-enforcement officials. The move to consider softening the sanctuary policy was made following a contentious public hearing attended by an overflow crowd of some 300 people. A large majority of speakers were immigrants’ rights supporters who made sometimes impassioned pleas against the move.

The policy review was prompted by the February murder of Bambi Larson, a 59-year-old South San Jose woman. The suspect in her killing is a homeless, undocumented young immigrant man, who has a history of arrests for possessing methamphetamine. Supervisor Dave Wasserman introduced the measure, saying he favors removing undocumented individuals who have committed serious and violent crimes from the community to improve public safety.

Critics of the proposed policy change said our local police should not be working with a federal agency that has a poor record of treating migrants and their families.

Six Bend the Arc members spoke out against the change, saying it will violate immigrants’ rights and promote discrimination against them by tarnishing the entire community on the basis of a single individual’s actions.

“We can’t let people walk out the front door of our jail into our public parking lot so that ICE agents can swoop in and seize that person without a judicial warrant,” said Rhona Mahony, a lawyer who leads the criminal justice reform effort for Bend the Arc South Bay. She noted that a federal judge recently ruled against the Los Angeles Sheriffs Department, finding that it is unconstitutional for a county sheriff to let ICE agents seize a person inside the county jail when the agents do not have a warrant, signed by a judge, that carefully describes the person.

“ICE agents have no way of knowing whether they have the right person, and they don’t care,” said Mahony. “If we are conniving at seizures without a judicial warrant, we are basically pretending to ignore and silently encouraging kidnapping by ICE agents. I don’t want our county to have any part of this,” she said.

Diane Glazer, the leader for Bend the Arc South Bay, said there are other ways to keep the county safe, such as increased mental health services and rehabilitation services for recently released inmates, undocumented or not.

“Please leave this policy intact and find other ways to keep our county safe without scapegoating and discrimination,” she said at the hearing.

Other speakers said communities will be less safe under the measure, because it would discourage immigrants from reporting crimes to local law-enforcement officials and from providing testimony in cases.

Four Bend the Arc leaders discussed the proposed change in an April 15 meeting with Santa Clara County District Attorney Jeff Rosen, who is advocating for a “balanced approach.” In a public statement, Rosen said he remains outraged by some tactics used by federal immigration authorities, but he believes there is a need for a better policy regarding the small number of undocumented immigrants who commit serious crimes.

At the April 9 hearing, representatives from the ACLU and the San Francisco Public Defenders’ office, as well as several religious leaders, all argued against a change in the sanctuary policy.

Santa Clara County has one of the strongest sanctuary policies in California, which bars police from any form of cooperation with ICE. The proposed backward step in the county’s sanctuary policy is permitted under California’s sanctuary law, the California Values Act. If the county passes this change, however, Santa Clara County would no longer be an inspiring national leader in completely separating local law enforcement from politically motivated U.S. immigration detentions and deportations.

Leaders of the South Bay Chapter of Bend the Arc urge all members to call their county Supervisor right now and ask for firm opposition to this change. You can find your Supervisor here: https://www.sccgov.org/sites/bos/bnc/Pages/default.aspx