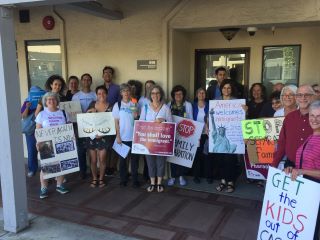 Just before Yom Kippur, more than 20 Bend the Arc members gathered in a prayerful circle outside the downtown Palo Alto office of Rep. Anna Eshoo to press for reduced funding for federal deportation activities.

Traditionally the 10 days between Rosh Hashanah and Yom Kippur are a time for deep reflection and remembrance of family members who have passed on, Rabbi Amy Eilberg told the gathering. This year Bend the Arc members around the country used the occasion to call attention to the plight of immigrants held in inhumane conditions in U.S. detention centers.

In Palo Alto, the group chanted songs of peace, unity and hope as Rabbi Eilberg led a brief service attended by one of Eshoo’s aides.

She then read the names of some 20 people – from infants to the elderly – who have died while in the custody of two federal agencies - Immigration and Customs Enforcement (ICE) and Customs and Border Protection (CBP).

“Dare we pray they will be the last to have given their lives in this way,” Eilberg said. “Surely our nation has sinned grievously.”

She called on Members of Congress to lift up their voices to hold the agencies accountable. David Bergen, a Bend the Arc member, then presented three requests of Eshoo: that she oppose any increases in ICE funding; that she oppose any raiding of other agency budgets, such as FEMA, to finance ICE and CBP activities; and that she vote against any “anomalies,” or special requests to augment ICE funding.

Balthazar Lopez, a senior field advisor for Eshoo, listened carefully to the requests and took notes. He said he would take up the issue with Eshoo, who was in Washington, D.C.

Nechama Tamler, a Bend the Arc South Bay board member, presented him with a gift basket of New Year’s cards and goodies, including the traditional pomegranates, date honey, Israeli chocolate and tea.

“We want you to enjoy the sweetness and remember that we are all immigrants,” she told Lopez, an immigrant himself. “It’s what makes our country great.”

The New Year’s action was one of dozens across the country sponsored by Bend the Arc as part of its Defund Hate campaign. Among other things, the campaign aims to limit funding to agencies, like ICE, with a deplorable record of immigrant treatment.